A collection of Angevin sculptures

The collegiate church of St Martin houses a permanent collection of statues in terracotta, wood and stone – an exceptional overview of religious sculpture in Anjou from the 14th to the beginning of the 20th centuries.

A number of masterpieces brought together in one place

Collected towards the end of the 19th and the beginning of the 20th centuries by an  art lover, Monseignor Henri Pasquier, the sculptures were classified Historical Monuments in 2000.
Amongst the most important pieces of the collection figures the statuette of La Vierge s’apprêtant à allaiter l’Enfant Jésus (The Virgin preparing to breastfeed the infant Jesus, 2nd half of the 16th century). Only 33cm tall and despite having lost her colours, she draws the eye by the delicacy of the modelling, the details of her costume and the elegance of her pose.

Next to this anonymous work are other statues that reveal the talents of the great names in terracotta sculpture and their workshops in Anjou and Le Mans in the 17th and 18th centuries. The art of terracotta sculpture reached its apogee at this time in the context of church reform which doted churches with a lavish decor of paintings, sculptures, alterpieces etc.

Three heads representing Jesus and his disciples John and James, testify to the savoir-faire of Gervais I Delabarre (circa 1560 – 1644) or his workshop. The polychromy enhances the careful modelling of the faces, bringing them to life through creases in the corner of the eyes and giving a rosiness to the cheekbones and a whiteness to the teeth.

Another important figure in Angevin terracotta sculpture is Pierre Biardeau (1608-1671) whose work is illustrated in this collection by the Vierge dite de Nozé (Virgin of Nozé), carved for the Convent of the Visitation in Angers towards 1635. Seated, she is looking away from the Infant Jesus on her kness while covering him with her veil. The statue was saved at the last minute from destruction during the French Revolution by being transformed into the Goddess of Reason. She is presented along with two other statues, Saint Paul and Saint Julie, standing proud and theatrical on their pedestals. 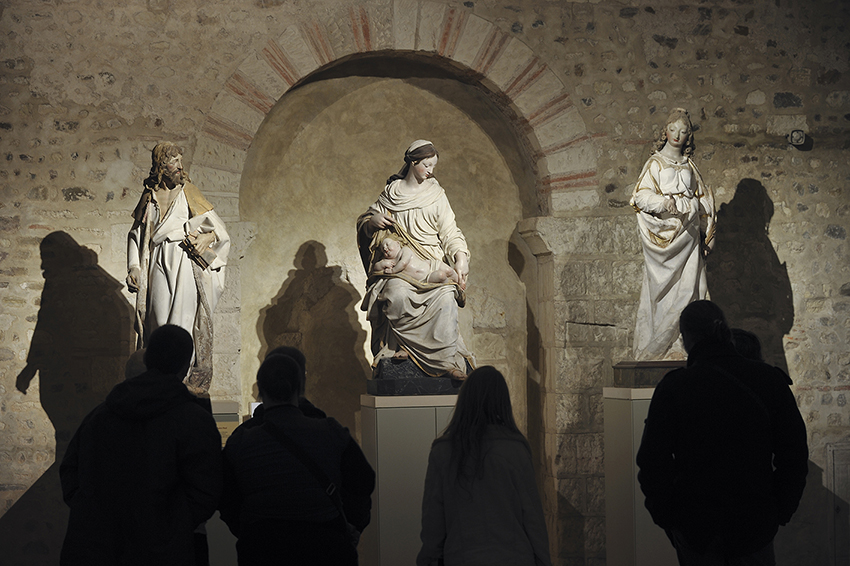 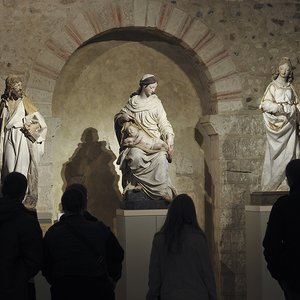 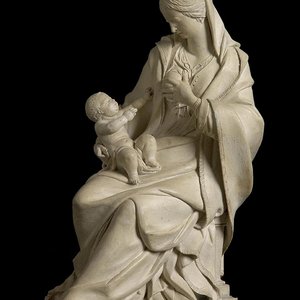 The secrets of terracotta sculpture

Admiring  these statues and examining the craftsmanship of their detail, makes it possible to better appreciate certain aspects of their making – the plasticity of the clay, the preparations for firing, the traces of the sculptor's gestures etc.

The statue (end of the 18th century) of Saint Sebastian, a 3rd century Christian soldier and martyr, is striking both for its size and its anatomical accuracy. Looked at closely however it also reveals the marks left by tools and  the cutting necessary to prepare it for the kiln.

Entrusted to the département by the Association of Friends of the École des Hautes Études Saint-Aubin, the collection was restored between 2001 and 2006 by workshops in Anjou and Touraine. The secrets of fabrication and restoration work are explained in a video.

The faces of Mary

14 statues in the collection represent the Virgin Mary, from her childhood to her presence at the foot of the Cross. From the choice of clothing and the array of feelings and attitudes depicted, to the evolution of how the female face could be imagined, the statues are a reflection of their epoque.

A fine example is the wooden sculpture, Vierge de Calvaire (Our Lady of Calvary),  one of the oldest  in the collection. She is shown with her hands clasped  and her head bowed to one side in silent pain. Her round-collared dress, tightened under the bust with little buttons done up at the wrists, reflects the fashion of the 14th century.

The collection of sculptures is completed by two works from the church itself  found during excavations.

Saint Margaret and the dragon

Discovered in a neighbouring cemetery this 16th century work in stone represents Saint Margaret, one of the most popular Saints of the Middle Ages. Wearing a crown, her hands joined in prayer, she is standing over the devil in the form of a full-bodied dragon who has just swallowed her and  still has a part of her mantel in his mouth.

Madonna and Child from the 14th century

Also in painted stone, this Vierge à l’Enfant (Madonna and Child) once decorated either the altar of Our Lady consecrated in 1360 by the bishop of Angers, or the gothic Chapel of Angels. Found in 1931 in the south arm of the transept during a dig conducted by the American archaelogist George Forsyth, the statue still has grace and finesse even though the infant Jesus is missing.